I feel a little like writing tonight, and have been wanting to put this down.

Having grown up with computers, they’ve been an essential part of my conscious life since I was six. While commonplace now they weren’t always, and each new generation of machine brought with it a burst of learning and creating. I’m feeling a little sentimental and started thinking of each one of them tonight, triggering a flood of dormant memories and senses. Let’s start at the beginning. 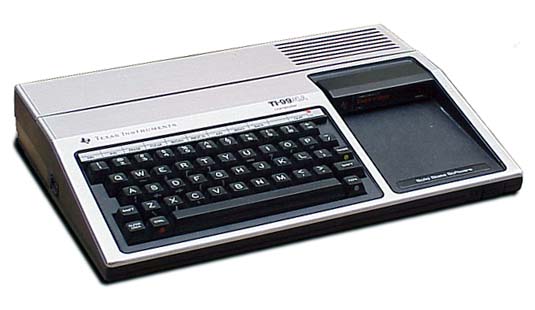 In the beginning was a Texas Instruments TI99. I don’t remember much about that computer, to be honest, except its unique shape and the first taste of programming. We didn’t have it long before I took it apart… it was never quite the same afterward. What do you want? I was 5. 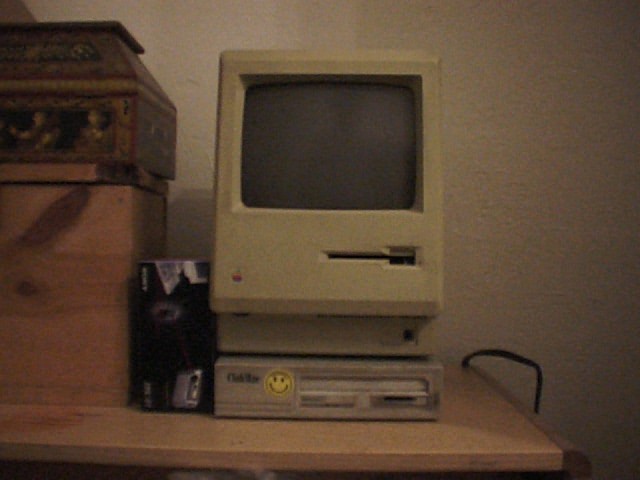 At the time, my mother worked at Sogitek as a technical writer, and many of her friends were engineers. Jeff, and his wife Karen, invited us over one day, where he proudly plopped me down to show me his brand new Mac. I was instantly, irrevocably captivated, and spent all afternoon glued to MacPaint, resulting in an epic drawing of a king cobra I was deeply proud of. Some months later, Jeff was laid off and offered to sell the magic box to mom for what was, I’m pretty sure, a steal. Even so, she was probably outrageously expensive for our family but mom dug deep and brought her home.

While she was nominally a family computer – and both my mother and sister made use of her – I was bonded for life. 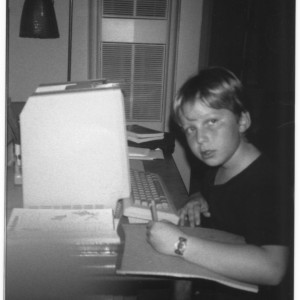 The first generation of Macs were brilliant, a massive advance over anything else of the time. Overly ambitious, with functionality well ahead of its specs, the little Mac we brought home had already been upgraded to the gills, a luxury we never could have afforded new. Eexternally a 128K original, she had been upgraded to 1MB of RAM, the 800K floppy drive, a SCSI port, and most impressively – a 35MB hard drive. She also came with an ImageWriter printer and an external floppy.

It’d be an understatement to say this computer changed my life – if anything, she helped define it. I learned more from, through and because of this lump of plastic and circuits than from any other source.

Not for nothing, this is the only old machine I still own, and I’ll never let her go. 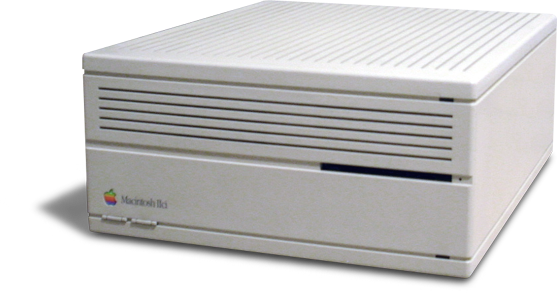 I finished my Bar Mitzvah in 1989, and sometime the next year I convinced my mother to help me buy a new computer with the gift money I had received. I managed to find a good deal somehow – this was a $6000 computer new, but I hunted for a deal and spent closer to half that – and I eventually paid her back.

The Mac IIci was, as far as I was concerned, the most perfect computer Apple had ever made. Cheaper than the IIfx, vastly more powerful than the LC, and more expandable than the IIsi, and all were clearly superior to the Macintosh Classic. It had a 25mhz 68030 and hardware FPU, color video, four expansion slots, and eight RAM slots. With a third-hand OrangePC card it even had a full-blown PC running inside running at full speed, sharing nothing but the monitor, keyboard and mouse. 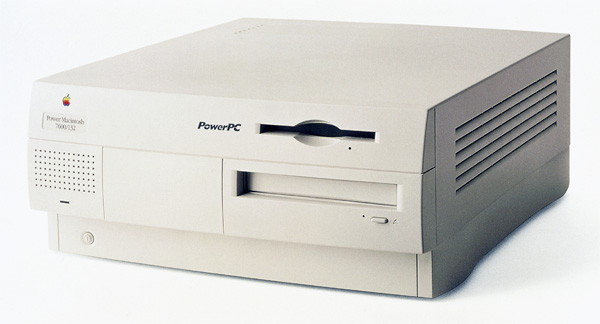 The PowerMac 7600 was a huge leap forward for me – the first time I owned a computer that didn’t immediately feel like it was full of limitations. Like the IIci before it, this model was squarely in the middle of the lineup – most of the power of the much more expensive tower models, and only marginally more pricey than the crippled lower-end options. This was the last computer I owned with a floppy drive, and the first with USB.

A few things made the beast what it was. 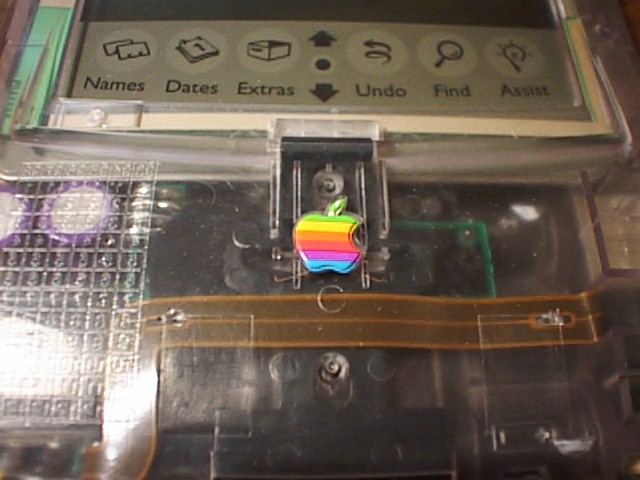 When I said earlier that the original Macintosh was the only one of these machines I still owned, I forgot the MessagePad. Often maligned and the subject of many jokes, this was a revolutionary device. I ultimately collected 4 or 5 different models, including several rare specimens such as a Motorola-branded Newton with integrated wireless modem, and this gorgeous unit – a MessagePad 110 with a transparent case, given to developers at one of the first Newton conferences.

The Newton was like nothing else before, and in many ways tried – mostly in vain – to push the personal computing environment forward as much as the original Macintosh had over ten years before. Its ambition was also its chief liability – the hardware was solid and ingenious, but seriously underpowered for its software to be effective. By the time the hardware evolved enough to support its aspirations, with the MessagePad 2000, the public had moved on to the simpler, cheaper, ultimately pragmatic, and insanely successful Palm Pilot platform. Nevertheless, the Newton was a magical device, for the first time in an actual product showing a glimpse at what the post-PC future might look like, so this clear MessagePad 110 will always be mine. 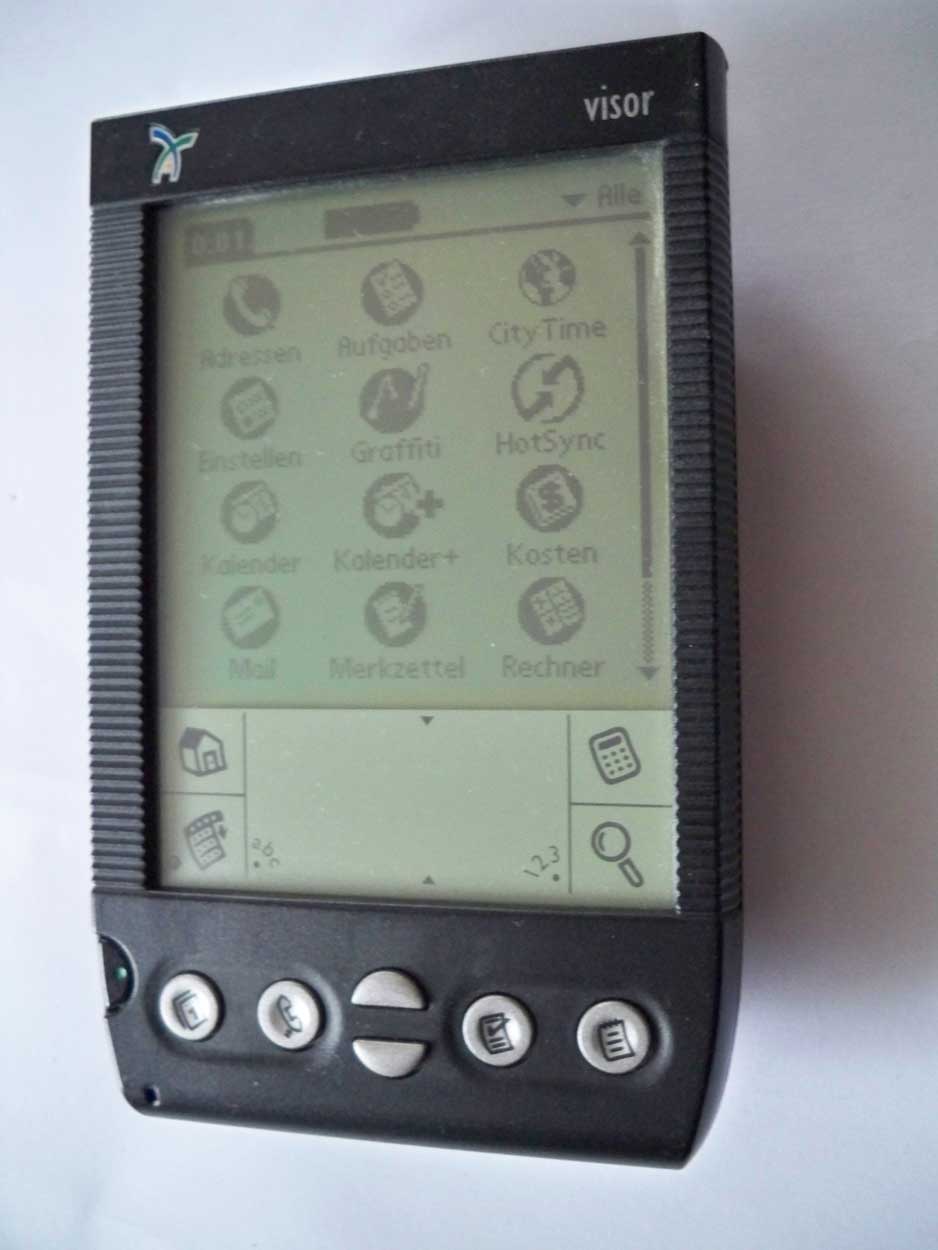 Where the Newton devices promised more than they delivered, the team at Palm aimed lower and created the first mass-market success for a handheld computer – the Pilot and its descendents. My first of these was a Palm III, followed by an IBM-branded Palm V (the WorkPad c3), each incremental refinements of the original. The software selection was enormous, the simpler Graffiti text input system faster and more reliable than the Newton’s, but Palm Inc. sold-out to 3com and quickly stagnated. The founders of Palm left and started a new company – Handspring – to build the next generation of Palm OS devices, the Visors and later the first real smart phone, the Treo.

The Visor was a hackers device, first and foremost. Where the Pilots were essentially sealed, standalone products, the Visors were designed to support third-party hardware addons, called Springboard. Over a few years I collected a dozen or so radical Springboard cards, turning my Visor into my first GPS nav system, wireless internet device, pager, climate sensor, and more. 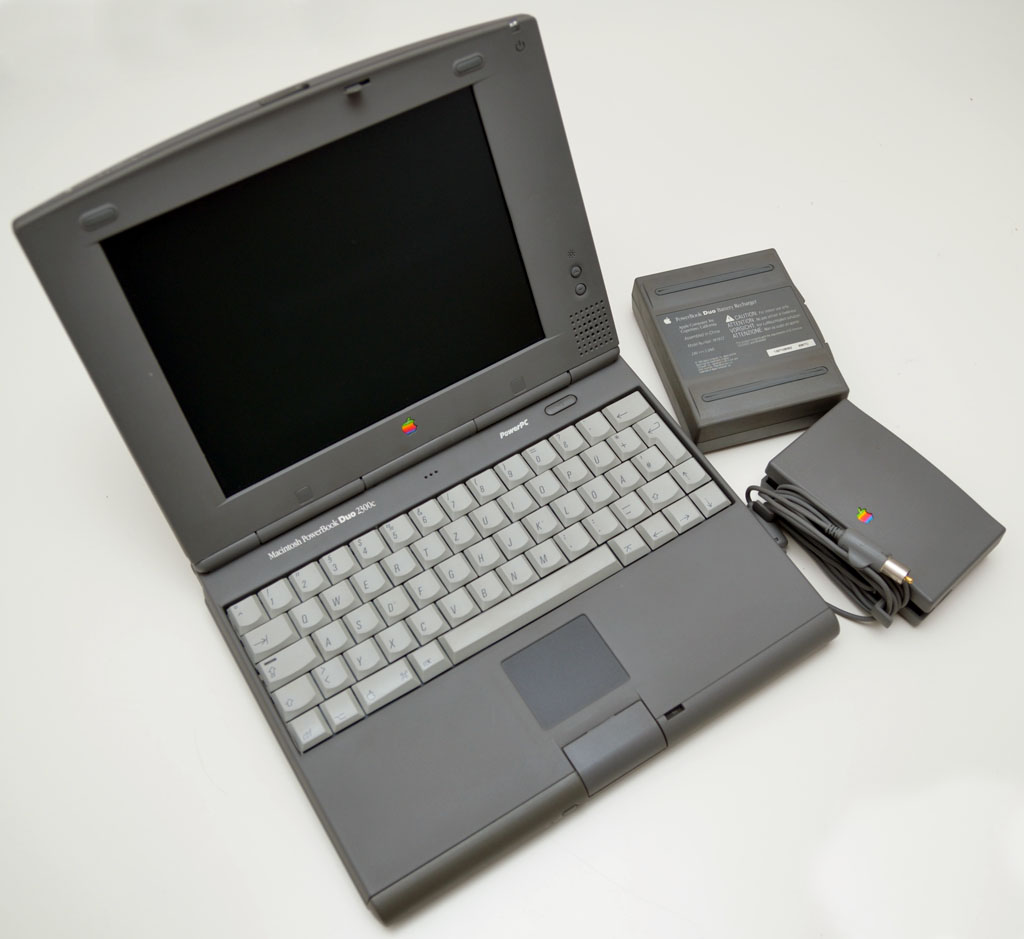 After having my first taste of portable computing with the Newton and Palm devices, and having a good job, I was finally ready and able to afford a laptop. As usual, I found a great deal on a tricked out used machine, the PowerBook Duo 2300c. The Duo was Apple’s first line of ultra-compact portables, made smaller than PowerBooks by eliminating many ports, the floppy drive, and forgoing the CD-ROMs just starting to appear in laptops. Instead, the Duo had a large, single connector across its hinge which allowed for the development of a range of versatile docks. I was very lucky that the fellow I bought the Duo from had already spent thousands on 5 or 6 docks, including the ingenious DuoDock II, a video dock, SCSI and ethernet dock, and external floppy and CD-ROM drives.

While the 2300c was a PowerPC-based Mac, it was crippled in several ways which ultimately proved fatal. Its screen was tiny and lacked sufficient video RAM to display even 16bit color without reducing the resolution even further, to a ridiculous 640×400 pixels. The built-in modem port was implemented in software, saving a few bucks on hardware while making the computer almost impossibly slow whenever you were dialed-in, necessitating an external modem. The harddrive was seemingly greased with molasses, which was further exacerbated by paltry RAM. Had these problems been fixed, it would have been brilliant – small, sexy and powerful, with impressive expansion options through the dock connector. As it was, it wasn’t worth the pain, and I sold it after 6 months for a larger, clunkier, but fast and cheap PowerBook G3. Still, the Duo was my first real taste of what a laptop could add to my computing habit, and I’d never be without a laptop again. 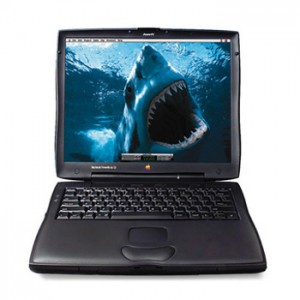 The Wallstreet (oy, what a name) was the laptop for which I dumped the Duo. Nowhere near the top of the line at the time, nevertheless it was loaded to the gills. A large, bright, colorful screen. A fast G3 processor. Plenty of RAM. Two expansion bays which could be easily loaded with CD-ROM, floppy, harddrive or battery modules. A PCMCIA slot for add-on video cards, modems, and more. The PowerBook G3 wasn’t my first portable, but it was my first portable which demanded almost no compromises compared to my desktop computing environment. It could drive a second monitor when I needed more screen real estate, was more than fast enough for real work. It quickly replaced my venerable old PowerMac 7600 as my primary computer, and for a long time I was convinced I’d never make a desktop computer my main again. 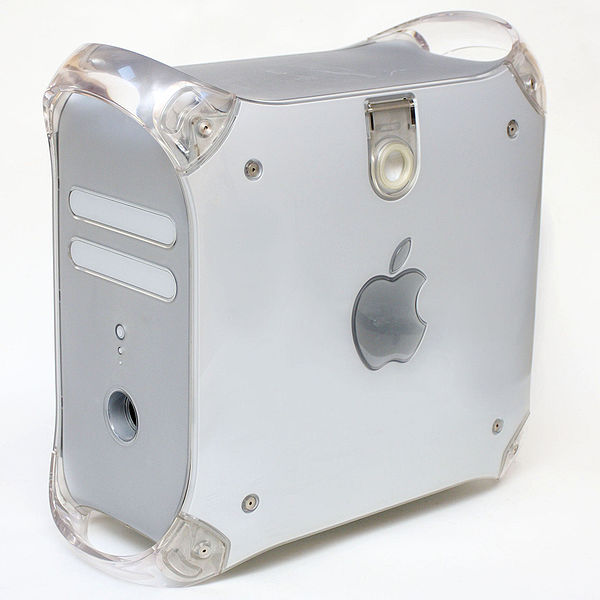 Not since the IIci had I bought a new-in-box computer from a retailer, but I had just sold a domain name for a nice price and decided to treat myself… I headed to MacMall in Santa Monica and bought my dream machine, fully loaded, with an amazing display.

This was the first time I had a machine on the leading edge, rather than in the middle of the pack, just as my interest in Mac OSX was becoming a fever. OSX was a radical departure from the classic Mac OS I had spent the last 15 years of my life working with, ripping apart, and building on. The G4 was the perfect machine on which to recraft a lifetime of computing habits, and learn to love Unix as much as Mac OS.

On this machine I taught myself Python and Perl and PHP. I learned how to configure Apache and MySQL, how to use bash, the GNU toolchain. I discovered ImageMagick and lame and ghostscript. A decade of automating my environment with QuicKeys and AppleScript and HyperCard and Filemaker ended, and shell and stdout and pipes and the rest were ascendant. I embraced OSX, and nearly 15 years on it’s still my dominant computing environment, GUI and CLI and API.